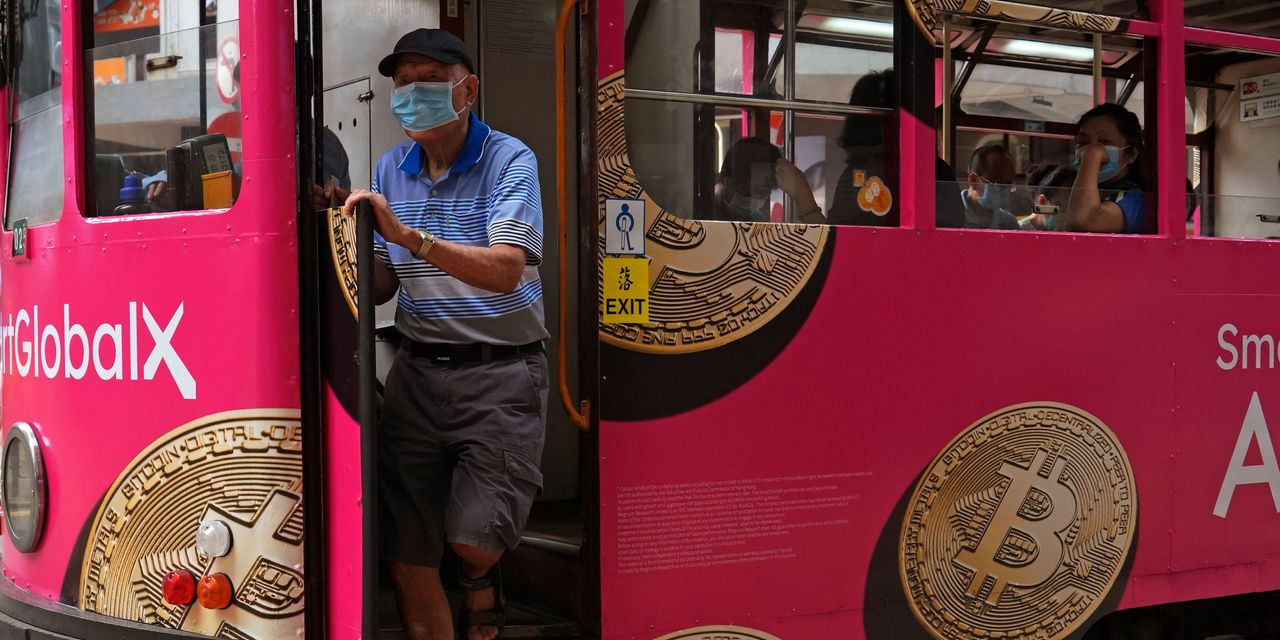 Crypto trading creates perhaps the most irregular of all verbs. I invest rationally, you speculate wildly, she lost the keys to her bitcoin wallet, we launched a new joke coin, they paid a penalty to settle a probe.

Regular readers might be surprised that I think Wednesday’s gigantic swings in the price of bitcoin and other cryptocurrencies support both the first two interpretations: rational price action and wild speculation. After all, I pointed out that bitcoin is worth virtually nothing if treated as a currency back in 2017, and I have frequently referred to the fact that it has no fundamentals to base rational valuations on.

The rational case for bitcoin is that it will become digital gold, something I used to think unlikely and is now clearly more plausible, but still unlikely. If bitcoin were to replace gold as the world’s backstop store of value independent of governments, it would be worth a lot more, as large numbers of institutional buyers would switch over.

If it doesn’t, it is worth close to zero. Its actual utility as a currency involves little more than hackers’ blackmail payments and drug dealing, thanks to slow and expensive transactions. There is zero chance of bitcoin achieving the aims of pseudonymous founder Satoshi Nakamoto, who wanted it used as a currency for small online payments, although there are other digital currencies—including those being considered by central banks—that might solve this problem.

Wednesday’s 30% drop in the price and rapid rebound to some extent fits the model of bitcoin being priced for either digital gold or the failure of a being a cryptocriminal currency. Markets find it hard to price binary outcomes, which is why startup biotechnology stocks—which typically either go the moon or vanish—are so volatile. Small changes in the probability of success or failure are amplified into large changes in the price.

The first piece of news was China’s tightening restrictions on cryptocurrency use by banks on Tuesday. In itself that doesn’t matter much, because as I said, bitcoin isn’t of any use as a currency. But it is a sign of the direction of travel: there is a higher probability that government restrictions on bitcoin will prevent its adoption as digital gold, so it should be worth less.

The second piece of news was Tesla Technoking Elon Musk’s tweet on Wednesday showing the emojis for diamond hands, implying the car company wouldn’t be selling its bitcoin stash, which by then was worth less than the $1.5 billion it paid. The rational interpretation is that this raised the probability that bitcoin will gain institutional and corporate adoption—Mr. Musk does run several companies, albeit unconventionally—and so the price soared again.

OK, OK. I don’t think this is all that was going on. Bitcoin and other cryptocurrencies have become a gamblers’ paradise. Rapid software development has focused on new ways to allow speculation, producing options, futures, repo, pegged tokens and automated lending. Some is about arbitraging different markets within crypto, but there is very little that overlaps into real-world uses, and most of this innovative programming is about satisfying those trying to get rich quick.

It isn’t a criticism of a financial market that it attracts gamblers—part of what makes markets work for long-term investors is that short-term speculators provide a constant stream of buyers and sellers, known as liquidity.

Still, Wednesday’s fall was much more about bitcoin owners looking at each other and at the price and not liking what they saw than it was about Tuesday’s news from China. The scale of the rebound, the opposite.

What is interesting about the speculation is that it could become either self-fulfilling or self-defeating. Big banks that profit from speculators are already being drawn in, giving crypto both a veneer of respectability and the institutional-level services that make it easier to attract serious investors.

On the other hand, something that can rise or fall—or, as on Wednesday, both—by a third in a matter of hours is inherently hard to pitch as an alternative to gold as a store of value. Institutional investors are very sensitive to volatility.

The other conjugations of the verb also come with pros and cons. Bitcoin’s cryptography and the impossibility of reversing transactions bring with it the permanent loss of a large amount of bitcoin. Estimates of bitcoin stuck because of misplaced keys range up to a quarter of all those ever created, and more are lost every year. More lost bitcoin is good for the price of those that remain, as it reduces supply. However, the prospect of losing them, or having the keys stolen, is a good reason to be cautious about buying them in the first place, especially for institutional investors.

The constant launch of new coins helps increase the popularity of cryptocurrencies in general. It also undermines the case for any one of them being the eventual winner. Bitcoin has a clear lead, but if institutions settled on something else as digital gold, that thing would become digital gold. Mr. Musk’s tweets about dogecoin, created as a joke, boosted its value by billions of dollars; sadly he never tweeted about WSJCoin.

Finally, the regulators. On the plus side, a clean market governed by well-understood regulation would appeal to major investors. On the downside, if regulators stepped in much of the current crypto industry would struggle to comply. Sentiment about digital coins could be hit by a regulatory clampdown, while the frantic pace of innovation would be slowed. At the extreme end governments could shut down almost all the industry by making it impossible to buy or sell; China closed crypto exchanges in 2017 and has tightened the screws on rule dodging since then.

Bitcoin is a long way from becoming digital gold, and its price doesn’t yet behave as a store of value the way gold mostly does. Like gold, its price isn’t driven by fundamentals. But for those speculating about whether it will succeed, there are rational ways to respond to news, which lead to giant swings in the price even before the pure momentum-chasing gamblers pile on.

Write to James Mackintosh at james.mackintosh@wsj.com

Bitcoin, Dogecoin, Ethereum: The Ups and Downs in Crypto Markets

Infrastructure Talks Are Going Off the Rails

A Great Artist’s Career in Anti-communism

The Eerie Familiarity of a Melbourne Lockdown