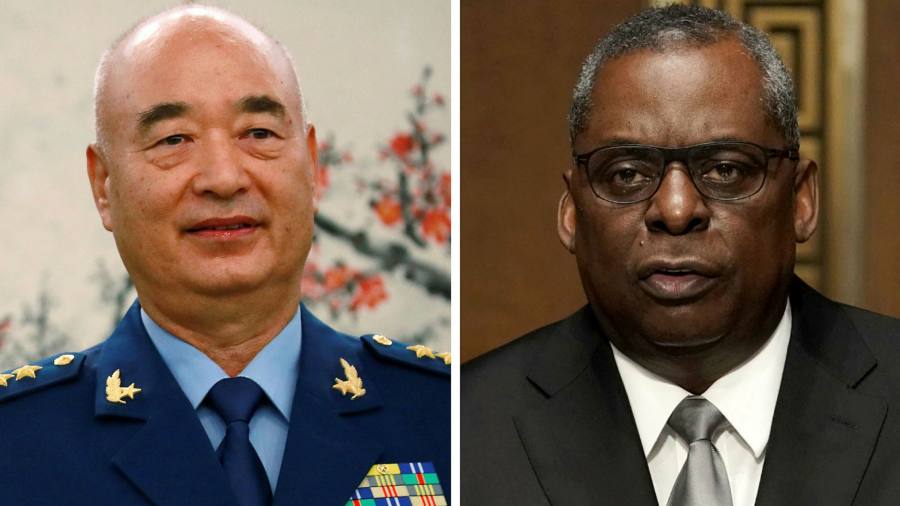 Beijing has rebuffed the Pentagon’s requests for talks between China’s top officer and the new US defence secretary, complicating bilateral relations at a time of heightened tensions between the world’s two most powerful militaries.

Lloyd Austin, US defence secretary, has made three requests to speak to General Xu Qiliang, vice-chair of the Central Military Commission and a politburo member who is China’s most senior military officer. But China has refused to engage, according to three people briefed on the impasse.

US officials have said that they do not want to hold high-level meetings with China just for the sake of it, particularly after the countries’ top foreign policy officials engaged in a public diplomatic spat in Alaska in March.

But the Biden administration thinks it is important for Austin to talk to Xu because of the rising tensions in the Indopacific. The two militaries are increasingly coming into closer contact, particularly in the South China Sea as the Chinese navy and air force conduct aggressive activity near Taiwan.

“The Chinese military has not been responsive,” a US defence official told the Financial Times about the requests for a call between Austin and Xu.

In addition to the stand-off over Austin’s request, General Mark Milley, chairman of the joint chiefs of staff, has not talked to his counterpart since early January before Joe Biden was sworn in, according to a second official.

Since Biden has taken office, the countries have sparred over everything from the repression of Uyghurs in Xinjiang to China’s military activity around Taiwan. China has attacked the US as an imperial power.

China flew a record number of fighters and bombers into Taiwan’s air defence identification zone in March, hours after a US official told the FT that President Xi Jinping was flirting with trying to seize Taiwan. While some experts think the threat is less severe, many view Taiwan as a dangerous hotspot.

Earlier this year, Chinese warplanes simulated missile attacks on the USS Theodore Roosevelt aircraft carrier near Taiwan. China has also been assertive around the disputed Senkaku Islands in the East China Sea that are administered by Japan but claimed by Beijing.

Austin had planned to travel to Singapore in June for the Shangri-La defence forum, which Chinese defence minister Wei Fenghe was expected to attend. The event was cancelled this week over Covid-19 concerns.

The US defence official said there had been discussion about a meeting with Wei in Singapore. But he said Austin, the fourth-ranking US cabinet member, opted against a meeting in favour of pushing for a call with Xu, who outranks Wei in the Chinese political and military system.

“We believe the appropriate counterpart is the vice-chair of the Central Military Commission,” the US official said.

Jim Mattis met Xu in Beijing in 2018 when he was defence secretary under President Donald Trump. But China almost always offers up its defence minister instead. This has increasingly frustrated the US because he has little power in the Chinese system and does not serve on the 25-member politburo that rules China.

The White House is split over how Austin should handle the situation. Some National Security Council officials are opposed to Austin dealing with Wei. Another group are less resistant, but want Austin to use any meeting or call to tell Wei that he would only hold talks with the CMC vice-chair.

The NSC declined to comment. The first defence official confirmed that there had been divisions, but declined to provide any details. The Chinese embassy in Washington did not response to a request for comment.

Bonnie Glaser, a China expert at the German Marshall Fund, said it was important for the Pentagon to be able to engage with real military decision makers, and pointed out that the CMC exercises command authority over the PLA.

“To address growing US concerns about China’s military operations and risk reduction measures to avoid collisions between US and Chinese forces that are operating in close proximity, the focus should be on the CMC,” she said.

While some officials and experts said Austin should insist on talking to Xu, others said it was important that the US open a line of communication with the Chinese military even if Beijing continued to stonewall over arranging a call with the CMC vice-chair.

Heino Klinck, a former Pentagon Asia official who spent years as a defence attaché in China, said it had always been challenging agreeing protocol for meetings with China due to the different structures of the two militaries.

“Given the situation with Taiwan and other issues such as the East China Sea and South China Sea, as well as attempted Chinese coercion of our key allies and partners such as Australia, it is important to have clear communication,” Klinck said.

“We need to be conveying to the Chinese what our own red lines are because they convey theirs.”