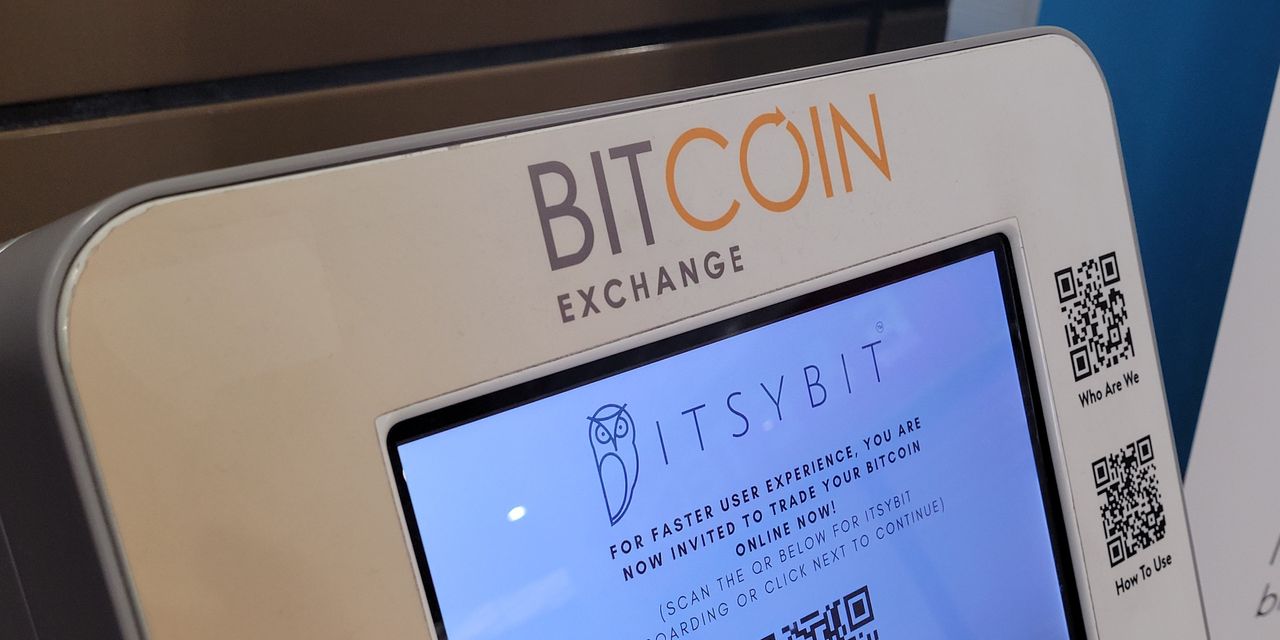 China’s efforts to restrain cryptocurrency trading and mining are adding to the wild moves in bitcoin and other markets.

Already down hard from records set this year, bitcoin and other digital currencies sold off sharply last week after Chinese authorities renewed pressure on the country’s banks and payment companies to curb cryptocurrency-related transactions. Markets stumbled again after a powerful superregulator chaired by Vice Premier Liu He pledged to crack down on bitcoin mining and trading. The price of bitcoin fell below $32,000 early Monday, down from over $44,000 a week earlier.

China is trying to rein in cryptocurrency activities even as the country has embraced the technology underlying bitcoin and has plans to roll out its own digital yuan that will be controlled by its central bank. Beijing also wants to shut down cryptocurrency-mining activities because they consume massive amounts of electricity, often from coal-fired power plants, while the country pledged to manage its carbon emissions.

“The Chinese government does not like the highly volatile, speculative nature of the cryptocurrency market,” said Fan Long, a co-founder of Conflux, a government-backed public blockchain network in China. He said the authorities could take further action to restrict or eliminate ways for Chinese citizens to exchange yuan into cryptocurrencies in the over-the-counter market.

On Sunday, Huobi, a major cryptocurrency exchange, said it would stop selling mining machines and related services to new users in mainland China. It will also suspend futures contracts, exchange-traded products and leveraged investment products to new users in a few countries and regions. OKEx, another popular digital-currency exchange, on Monday said its own token, OKB, can no longer be traded with the Chinese yuan.

Spokespeople for the Seychelles-based OKEx and Huobi said they strive to be in regulatory compliance in the jurisdictions they operate, and are committed to serving and protecting their customers’ interests and assets. Both exchanges have operations in multiple countries.

“Crypto-related activities have posed two serious issues in China,” namely financial stability and energy consumption, said Shen Wenhao, a Beijing-based partner at JunZeJun Law Offices. He said it was the first time the cabinet-level financial regulator had mentioned bitcoin mining publicly and linked it to financial stability. The recent messages from regulators “could signal the beginning of a series of new movements taken by the Chinese government to crack down on crypto-related activities from multiple angles,” he said.

China, the world’s most populous nation, has been a hotbed for cryptocurrency trading and mining. In 2017, concerns about capital flight led Beijing to impose bans on Chinese cryptocurrency exchanges and digital-currency fundraisings known as initial coin offerings.

Authorities subsequently instructed Chinese platforms and financial institutions to stop providing virtual-currency trading services. They also ordered the closing of operations that produce—or mine—cryptocurrencies, even though industry participants say mining still takes place in parts of the country, such as the southwestern regions. Last week, authorities in Inner Mongolia, a Chinese border region, sought help from the public to report on cryptocurrency-mining activities.

Cryptocurrency exchanges that operate offshore can be accessed by people in China using virtual private networks that help them bypass the country’s internet restrictions. Some of the exchanges have been facilitating bitcoin and other digital-currency trades with China’s domestic currency, the yuan.

Such transactions typically take place over the counter in what is known as the peer-to-peer market. They have proved challenging for Chinese regulators, banks and payment companies to track and curb, because they involve direct fund transfers between individuals.

In essence, a person who wants to buy bitcoin using yuan can be matched with another individual who is looking to sell the digital currency and receive yuan. The buyer sends yuan directly to the seller using a mobile payment app or an online bank transfer, and the seller authorizes the exchange to release the bitcoin to the buyer after confirming the payment.

Lennix Lai, a director at OKEx, said that while China has disallowed cryptocurrency exchanges and ICOs within its borders, it hasn’t outlawed the owning of digital currencies by its citizens. “People are allowed to mine bitcoins, they can transfer bitcoins to others and settle their trade in renminbi,” Mr. Lai said, using another name for the Chinese currency, adding that “there are a lot of bitcoin natives and believers in China.”

In response to a Wall Street Journal query, a spokesman for Ant Group Co., which owns Alipay, pointed to a statement it issued in 2019. “Alipay closely monitors over-the-counter transactions to identify irregular behavior and ensure compliance with relevant regulations.” Any transactions on the platform that are identified as being related to bitcoin or other virtual currencies will result in a stoppage of payment services, the statement said.

“We take our compliance obligations seriously, and will continue to take action against any illegal transactions,” said a spokesperson at Tencent Holdings Ltd., which owns WeChat Pay.

Some Chinese banks have also warned their customers against using their accounts for cryptocurrency transactions. China Citic Bank Corp. , for instance, said in an April statement that no institution or person may use the bank for transactions related to assets such as bitcoin and litecoin.

“China is clearly uneasy about the volatility of crypto markets,” said Claire Wilson, a partner at consulting firm Holland & Marie in Singapore. “In theory, it would be possible for a State to issue a total ban on crypto. However, on a practical level, such a ban would be extremely difficult to enforce,” she said.

“ ‘[It] could signal the beginning of a series of new movements taken by the Chinese government to crack down on crypto-related activities from multiple angles.’ ”

As far back as 2013, a consortium of Chinese government agencies and regulators issued warnings about the anonymity, borderless and unregulated nature of bitcoin and told domestic financial and payment institutions not to carry out bitcoin-related activities. The authorities said they wanted to protect the legal currency status of the yuan, prevent money laundering and maintain financial stability.

The recent warning “probably is the harbinger of more formal crypto regulations,” said Winston Ma, adjunct professor at New York University’s School of Law and a former managing director of China Investment Corp., the country’s sovereign-wealth fund. He said China has also emphasized the need to regulate financial technology since the suspension of Ant’s IPO in November.

—Jing Yang contributed to this article.

Corrections & Amplifications
Claire Wilson is a partner at consulting firm Holland & Marie in Singapore. An earlier version of this article incorrectly called it a law firm. (Corrected on May 24)

Young M.A. Refused to Be Stumped By The 'Expensive Taste Test'

All About Hula Berries, the Pineapple-Flavored Strawberries You Need to Try This Summer

Should You Really Be Using Rice Water for Your Hair?

Shut Down the Jan. 6 Gulag