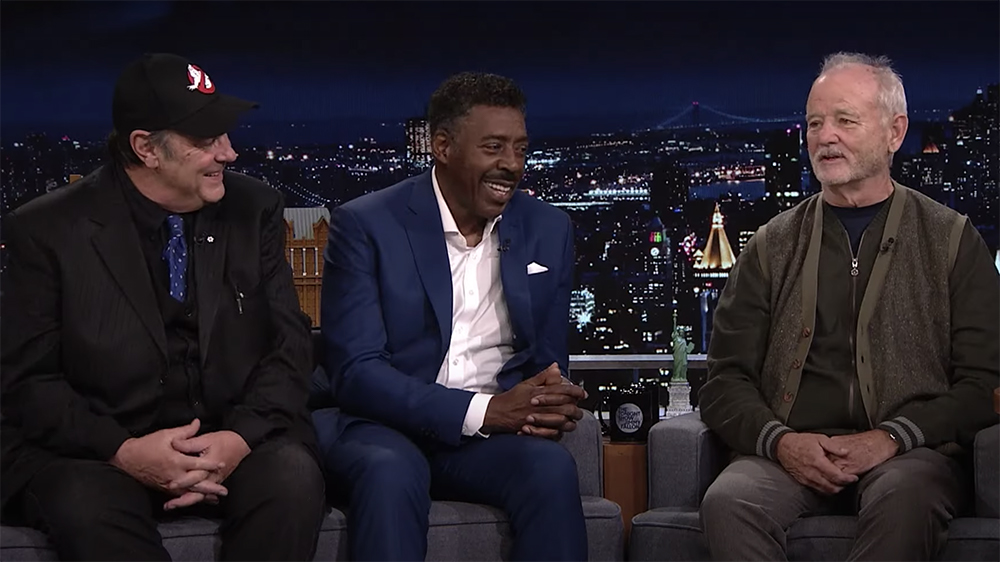 Bill Murray, Dan Aykroyd and Ernie Hudson appeared together on “The Tonight Show Starring Jimmy Fallon” ahead of the release of the upcoming sequel “Ghostbusters: Afterlife.” The group is also set to appear on “Late Night With Seth Meyers.”

The three actors starred together in the original ’80s duology of “Ghostbusters” and “Ghostbusters II,” playing the eponymous crew of phantom-capturing parapsychologists alongside the late Harold Ramis. Murray, Aykroyd and Hudson also played smaller roles in Paul Feig’s 2016 reboot of the property.

During their late night appearance, the trio spoke at length about their experience making the original films together and what it meant to pass the torch to a younger generation of Ghostbusters.

“Jason Reitman wrote a great script, so full of heart, going right back to the first two movies and its DNA… We just read it and thought, ‘This is the right time,’” Aykroyd explained on “Fallon.”

“Jason is the son of the original [‘Ghostbusters’] director Ivan Reitman,” Murray continued. “He had his own take because he grew up as a child of the Ghostbusters in a way. He had something he thought would work as a good story and we all agreed that he got it.

Fallon asked if the group remembered how the “Afterlife” director behaved as a child on the “Ghostbusters” set. “He was a pain in the ass,” Murray joked.

Hudson also recalled coming into the “Ghostbusters” fold, coming from a classically trained acting background and teaming up with a group of comedians for the original film.

“I’m always looking for a job, so I was happy to be working,” Hudson joked. “They were always very welcoming.”

“Ghostbusters: Afterlife” follows the events of the first two “Ghostbusters” films, picking up with the old crew decades later while adding on some new characters. Along with Murray, Aykroyd and Hudson, both Sigourney Weaver and Annie Potts are also reprising their roles from the original film. Carrie Coon, Finn Wolfhard, McKenna Grace and Paul Rudd are among the cast of newcomers. The film will hit theaters in North America on Friday.

In his review of “Ghostbusters: Afterlife,” Variety chief film critic Peter Debruge called the installment “a fresh jolt of energy [that] offers fan service alongside a new entry point for younger audiences.”

Watch the late night appearances below.

Advent Nears Deal to Buy McAfee for More Than $10 Billion

Chris Wallace Commends Jen Psaki: ‘One of the Best Press Secretaries Ever’