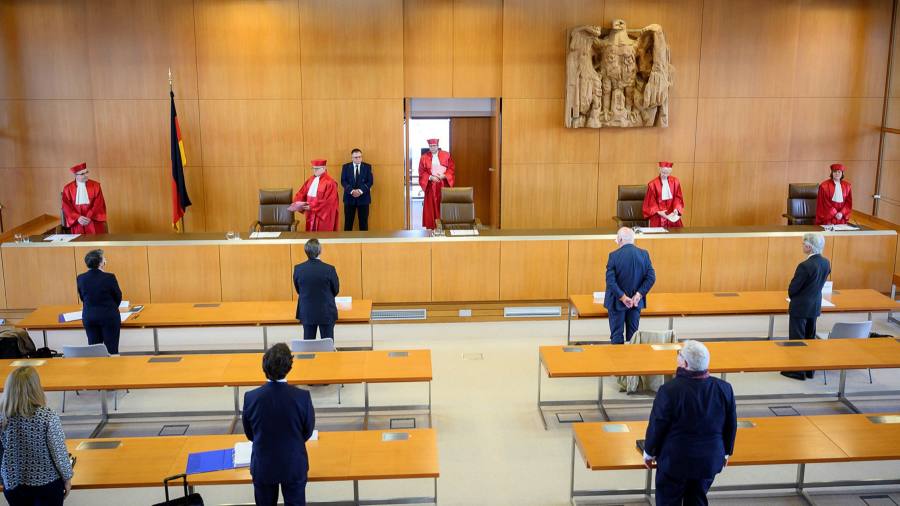 Germany’s constitutional court has rejected the latest attempt to block the European Central Bank from buying sovereign bonds, turning the page on a six-year legal challenge against the eurozone’s flagship monetary policy programme.

The country’s highest court on Tuesday rejected applications to revisit its ruling of May 2020, when it ordered Germany’s parliament and central bank to scrutinise the impact of the ECB’s asset-purchase scheme.

“The applications are inadmissible,” the court said, adding that the plaintiffs “exceed the procedurally permissible scope of an order of execution . . . given that the orders sought would go beyond the points of fact and law decided by the court in the aforementioned judgment”.

“The applications are also unfounded given that the federal government and the Bundestag substantially addressed and appraised the monetary policy decisions taken by the ECB Governing Council following the judgment of May 5 2020, including the proportionality assessment conducted and substantiated by the ECB,” it said.

The complainants — a group of about 1,750 people, led by German economists and law professors — first brought their case in 2015. They argued the ECB was straying into monetary financing of governments, which is illegal under the EU treaty.

Last year, the court in Karlsruhe stopped short of ruling that the ECB had broken the law, but it judged that the German government and parliament had failed to ensure that the ECB carried out a “proportionality assessment” of its €2.4tn sovereign bond-buying scheme.

Unless this assessment was carried out, it said, the Bundesbank would have to stop buying bonds on behalf of the ECB and draw up plans to sell the more than €500bn it owned — a move that could have imperilled the entire scheme.

However, this threat was averted after the ECB debated the proportionality of its asset purchases and provided unpublished documents analysing their impact to the German authorities, prompting the finance minister to declare that the central bank had fulfilled the court’s requirements.

The ECB has relied on bond purchases as one of its main tools for countering the economic fallout from the coronavirus pandemic. Last year, it launched an emergency scheme to buy an extra €750bn of bonds, which it expanded in December to €1.85tn.

In response, the rightwing Alternative for Germany brought a fresh legal challenge against the ECB, alleging it had crossed the line into financing governments because its new scheme ditched some self-imposed limits that governed previous asset purchases.

Inflation and markets are tied

GMA's Amy Robach is a knockout in figure-hugging Zara skirt