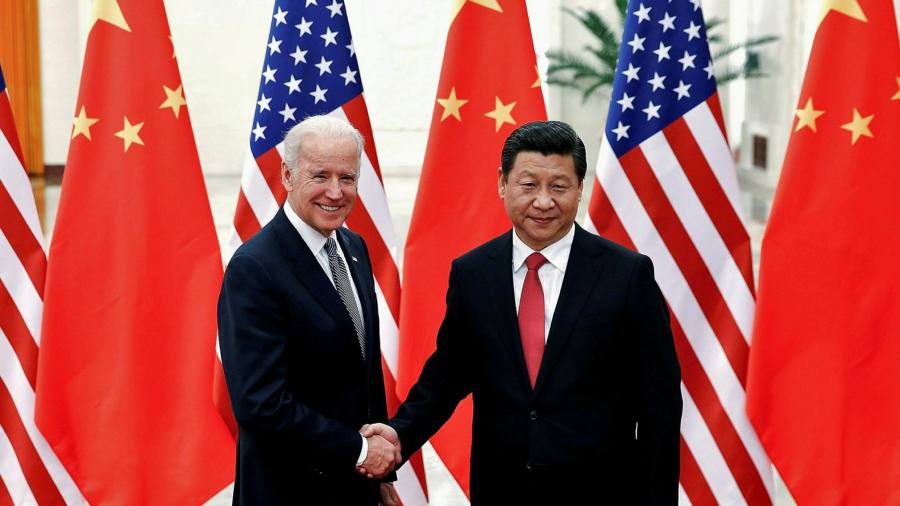 President Joe Biden and President Xi Jinping will hold a virtual meeting on Monday, in an intensified effort to smooth relations amid concerns about China’s military activity near Taiwan and its growing nuclear arsenal.

The White House said that Biden and Xi would speak on Monday evening, Washington time, following two calls held earlier this year between the American and Chinese leaders. Biden had hoped for an in-person summit, but Xi has not left China for almost two years because of the pandemic.

“The two leaders will discuss ways to responsibly manage the competition between the United States and the People’s Republic of China as well as ways to work together where our interests align,” said Jen Psaki, the White House press secretary.

The virtual summit comes as US-China relations remain in their worst state since the countries normalised diplomatic relations in 1979. Biden has taken China to task for everything from its assertive activity around Taiwan to its persecution of Uyghurs in Xinjiang. Meanwhile, China has criticised the US for interfering in its national interests.

The meeting comes on the heels of a Pentagon warning that China is rapidly expanding its nuclear forces and plans to more than quadruple its arsenal of nuclear warheads to at least 1,000 weapons this decade.

Over the summer, China also tested two hypersonic weapons, including one that flew around the earth. The latter spooked the Pentagon because it showed that China had found another way to target the US with its nuclear capabilities.

A senior US official said Biden had made clear that while he welcomed “stiff competition” with China, he did not want conflict. “This meeting is a way for him to make sure there’s no misunderstanding on that,” the official said.

“This is not about seeking specific deliverables or outcomes. This is about setting the terms of an effective competition where we are in the position to defend our values and interests and those of our allies and partners,” the official added. “When such terms — or guardrails — are established, we can sustain a vigorous competition.”

Speaking to Asia-Pacific leaders this week, Xi warned other countries not to join the US in trying to counter China, saying the region “cannot and should not relapse into the confrontation and division of the cold war era”.

His comments came as the Chinese Communist party for the first time in four decades passed a “historical resolution”, which credited Xi with being the “key to the great rejuvenation of the Chinese nation”. The move strongly suggests that the party will break with precedent and give Xi a third term as general secretary next year, paving the way for reappointment for a third term as president starting in 2023.

Singapore to End Free Covid Treatment for Those ‘Unvaccinated by Choice’

Pouring Fuel on the Spending Fire