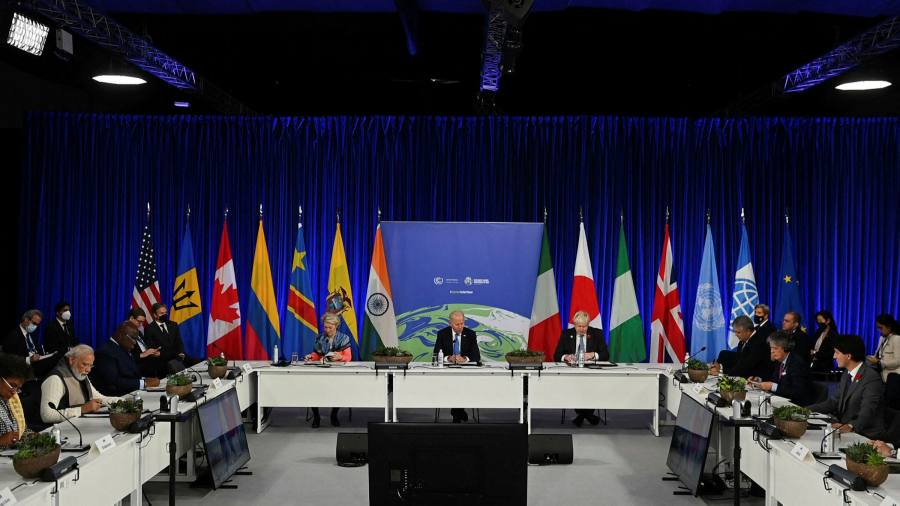 A slogan of climate activists outside the COP26 summit in Glasgow this week has been: “Keep 1.5 alive.” It refers to a goal in the 2015 Paris accord to try to limit global warming to a safer 1.5C above pre-industrial levels. The chances of hitting that target now, following a dearth of leadership from the most important countries in the world, is “close to zero”, according to the International Energy Agency. The failure of China and the US to sign up to a deal to phase out coal production heaps more pressure on the second week of the conference to detail how the grand pledges that have managed to be secured can be delivered.

The past week has provided grounds for cynicism: the leader of the biggest polluter in the world, China, did not even show up. While US president Joe Biden was quick to criticise the absence of Xi Jinping, his own decision not to sign up to the coal pact — a Democratic senator in coal-heavy West Virginia is key to his efforts to pass a sweeping $1.3tn infrastructure bill — struck a severe blow to what was meant to be a flagship policy of COP.

There was little chance Xi would ever attend the conference, given he has not left China in two years (Xi instead sent a written statement as the UK vetoed video link speeches). But it adds to a sense of isolationism by China. The 2015 Paris COP succeeded in part because of intense diplomatic footwork between Washington and Beijing in its lead-up. China has struck its own course by pledging not to finance foreign coal plants and setting a target of reaching net zero emissions by 2060. But it still continues to invest in domestic plants as it deals with an energy crisis. Multilateralism ought still to mean something to China, particularly when it is one of the largest recipients of climate finance from development banks.

Still, this week has yielded some tangible progress. Some 100 countries struck a methane deal, though some big emitters did not sign up. India committed to net zero, albeit by 2070 rather than 2050. Developed countries came up with an $8.5bn plan to wean South Africa off coal. Such targeted support for poorer countries should be encouraged.

Claims by Mark Carney, a former Bank of England governor, of a $130tn commitment from private-sector assets were overblown, but he did manage to shepherd meaningful pledges from financial institutions. He is correct to stress the need to enlist the private sector to finance the transition to net zero. But institutions that signed up to the initiative were lambasted for still funding fossil fuels. To gain credibility, they need to commit to a deadline to withdraw that funding. Companies cannot be relied upon to take action without policy and regulation. Regulators could consider whether lenders should be penalised through higher capital charges for holding legacy brown assets on their balance sheets.

An initial IEA stocktake of pledges made this week estimates their effect could limit global warming to 1.8C. That is progress — even if it is not 1.5C — as long as those commitments are honoured.

Which raises the thorny question of enforcement. Pledges made at COP26 are not legally binding. The ill-fated 1997 Kyoto protocol, which the US signed but never ratified, underlined the difficulty of trying to turn pledges into reality. Countries should nonetheless have to explain at the next COP why they have not complied with agreements made at this one. Otherwise it is all to easy to overpromise and underdeliver, as the path of the previous 25 conferences of the parties has demonstrated. Only one week is left to differentiate this COP from all the rest.

Parents Built a School App. Then the City Called the Cops