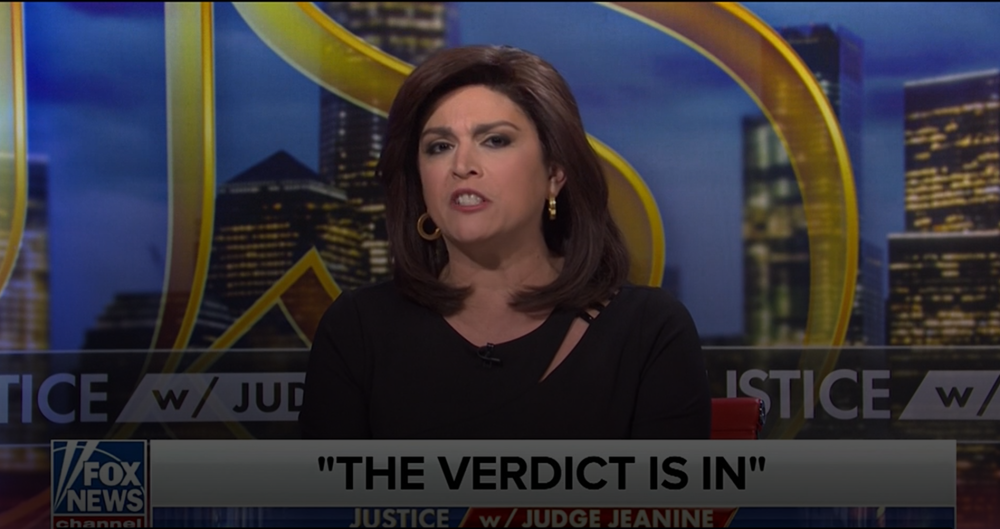 “That loveable scamp was put through a nightmare of a trial,” Strong as Pirro said. She noted that he was involved in a shooting that killed two men and wounded another because he had taken the patriotic step of “protecting an empty used car lot in somebody else’s town.”

“SNL” regular Mikey Day played Judge Bruce Schroeder, who’s comments and actions from the bench raised concerns about his impartiality. Day as the judge asserted none of his moves “gave my client an unfair advantage in any way.” When Pirro noted his use of “client,” the judge replied, “Oh yeah, I keep doing that.”

Chloe Fineman and Chris Redd played two young liberal pundits who came on to debate Pirro. When Fineman’s character expressed idealistically, “This is not who we are,” Redd’s character responded, “I feel like it is.”

Alex Moffatt made a brief appearance as House Minority Leader Kevin McCarthy (R-Calif.) in a scene that spoofed McCarthy’s long speech in Congress last week as he tried to slow the passage of President Biden’s groundbreaking infrastructure spending plan. Moffatt’s McCarthy stood at a podium and flipped a water bottle and accused Democrats of “trying to flip this thing around.”

After Pirro took a shot at President Biden for under going a colonoscopy last week (“socialized butt play paid for by your tax dollars,” as she put it), Judge Jeannine introduced “the real muchacho who got this done,” President Donald Trump, as played by new “SNL” recruit James Austin Johnson.

“People are saying nobody did more for infrastructure than me and those people are people who are me,” Johnson as Trump said.

Judge Jeannine egged him on until Strong broke into the iconic “Live from New York, it’s Saturday night.”

‘MAFS’ Season 13 Reunion: Which Couples Are Still Together?

The episode is hosted by actor Simu Liu, star of Marvel Studios’ “Shang-Chi and the Legend of the Ten Rings” with musical guest Saweetie.

Liu’s monologue noted he’s Marvel’s first “openly Chinese superhero” and that he is only the fourth Chinese person to host “SNL.”

Liu, who was born in China and grew up in Canada, noted his path to landing his big breakthrough role in “Shang-Chi,” which was released in September. He recalled his early years working children’s birthday parties in a “Spider-man suit from Walmart.” He also remembered a particularly tough kid named Trevor who kept kicking him and accusing him of not actually being Spider-man.

The Skyrim and Sopranos Meme Universes Are Colliding

A White House aide who traveled abroad with Biden tests positive for the coronavirus.

Lady Gaga Shines in the Curiously Drab House of Gucci