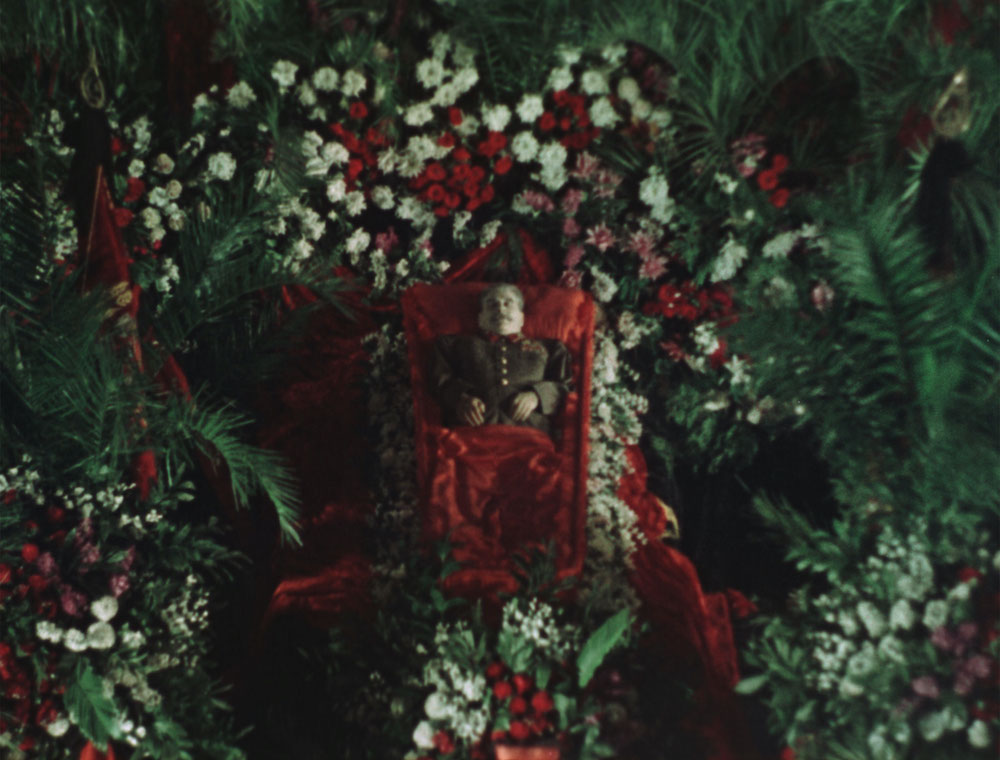 The 20th century is likely unique in laying claim to three sociopathic dictators whose complete disregard for humanity in either the individual or the collective has justifiably earned them the label “monsters.” Hitler, Mao and Stalin shredded utopian notions of moral progress, their crimes exposing the inadequacy of language to convey the scale of their atrocities while sending psychologists tripping over themselves in an attempt to explain the nature of evil.

True to form, Sergei Loznitsa (“The Event,” “Maidan”) doesn’t attempt to explain the unfathomable, and he makes language subservient to the image because he knows that words lie. Of course, images lie too — Stalin was an expert on that subject — but when edited to reveal rather than disguise, they have a devastating power. Such is “State Funeral,” an awe-inspiring montage of Stalin’s orchestrated lying-in-state and obsequies, whose impact moves from merely impressive to staggering depending upon the viewer’s knowledge of “Uncle Joe” and his henchmen.

On a purely cinematic level, it’s true that little background is needed. That’s a testament to Loznitsa’s brilliance as a filmmaker, guided by an uncanny understanding of editing and soundscape. Although a brief text at the very end summarizes Stalin’s murderous rule, it’s hard to imagine someone watching “State Funeral” without some foreknowledge. How else can we read into the thousands of faces of people burdened by decades of starvation, mass purges and the devastation of the war, ended just over seven years earlier? Do we see genuine grief or something even more frightening, an incomprehensibility spawned by suffering? Audiences unable to identify Stalin’s cronies will still feel the film’s power, yet that power is amplified when contemplating the crimes of Lavrentiy Beria or Lazar Kaganovich as they pay respects to the man who weaponized their amorality. Both as film and as history, “State Funeral” stands as a canonical work.

The Soviet propaganda machine went into overdrive when Stalin died in March 1953, employing some 200 cameramen to capture events from the moment the coffin was brought inside Moscow’s House of the Unions to the interment alongside Lenin and the surprisingly short speeches that followed. Loznitsa pored over 40 hours of footage from those four days, not just of the events in the capital but scenes of mourners from across the Soviet Union, incorporating images of Siberian workers, Tajik villagers, Estonian city-dwellers and others all listening to announcers broadcasting tributes over omnipresent loudspeakers. As originally intended, the footage reinforced the party line spouted by Stalin’s protégé and successor Georgy Malenkov at the funeral, about how Stalin eliminated ethnic conflict, yet if ethnic conflict had temporarily been quelled, it was through forced mass migration and terror.

Loznitsa expects us to interrogate these images of a nation in mourning, demanding that we question the source of these expressions of grief. The answer, which he refuses to supply, is a complex one given how Stalin promoted a cult of personality that left the nation bereft when he died: After decades as the god-like father figure, his absence created an empty chasm. By that point, the vacuum of disinformation made it easier not to question things, while the horrors perpetrated by the regime ensured any dissent was crushed. As such, it can be hard to pinpoint differences between zombie-like numbness and genuine sadness at the death of a leader.

Equally ambiguous though no less complex are the expressions on the faces of the privileged who stream past the coffin in Moscow. These scenes are the film’s centerpiece, alternating between wondrously restored crisp black-and-white and deep saturated color, their seamlessness a testament to the remarkable skill with which Danielus Kokanauskis spliced them together. Stalin’s waxy body lies atop a literal mountain of palms and flowers, the open casket tilted at an angle to allow the masses to see his face practically hovering above them. The scenography is as surreal as it is obscene, arranged so the man responsible for the deaths of millions could be venerated by crowds who climb the elaborate staircase and then file past with astonishing rapidity, the pace designed to allow the maximum number of people through.

They’re all there, the leaders of the Soviet state, the men who carried out murderous campaigns on behalf of the dictator, some accompanied by their wives. Delegations from different towns and societies compete for the lavishness of their floral wreaths. Loznitsa doesn’t forget to show the foreign dignitaries who flew in from the communist bloc and non-aligned nations as well as iconic figures such as Dolores Ibárruri, “La Pasionaria,” defenders and apologists only some of whom later questioned their loyalty. Most incongruous are the ambassadors at the funeral itself, dressed in regulation top hats that feel decidedly out of place.

As one expects with Loznitsa, there’s no guiding narration and the only commentary comes from radio broadcasts of the time offering encomiums of stomach-churning disingenuousness. From the roof of the Lenin mausoleum with Stalin’s name freshly carved on the front, the leading party apparatchiks deliver brief words of hyperbole. The film finishes with a Fellini-esque shot of Stalin’s portrait dangling from a crane as it flies over an industrial site, accompanied by Sergei Lemeshev’s 1951 recording of Matvey Blanter’s “Lullaby,” coaxing a child to fall asleep in the warmth of Stalin’s paternal love — state-sponsored gaslighting has never been more terrifying.

The State of Household Debt in America