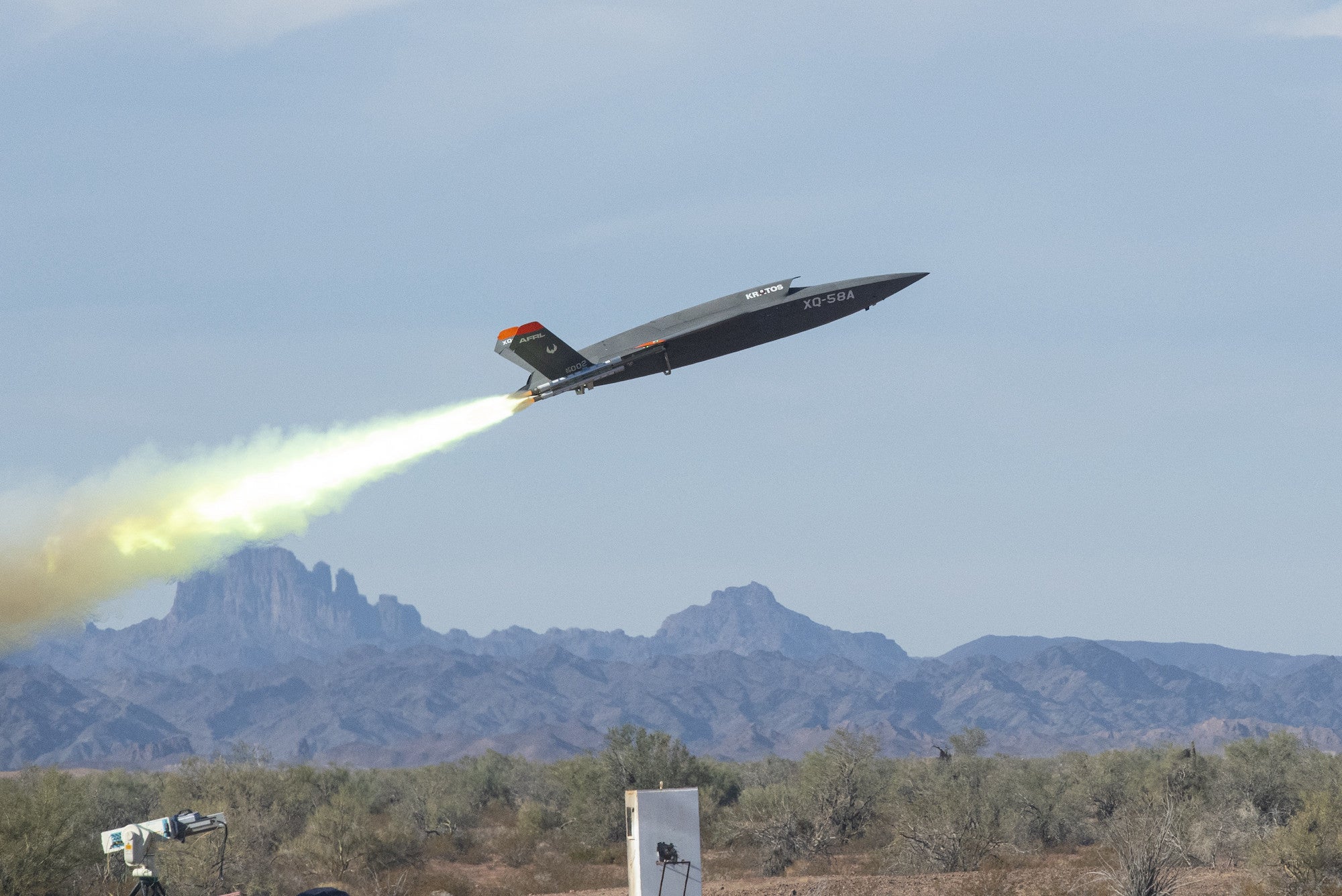 The Air Force wants its next jet to be fast, cheap, and eminently flexible. It is arriving in the form of a drone, designed in such a way that it can be modified over and over again as a platform. To build this drone jet, the Air Force Research Lab awarded a contract worth almost $18 million to Kratos, maker of aerial target drones as well as the Valkyrie and Mako combat drones.

Formally called the “Off-Boarding Sensing Station” (OBSS), the program is a specific request for “the design, development, and flight demonstration in an open architecture aircraft concept to achieve the goals of rapid time-to-market and low acquisition cost,” with an expected delivery of Oct. 31, 2022.

Kratos hinted at development of the program before the contract was awarded on October 26, 2021, but even with some of that development occurring previously, creating a new and usable jet in the space of a few years is a remarkable shift. This can be read, in part, as a response to the long and somewhat tortured history of the F-35 series jet, the Air Force, Navy, and Marine Corps’ primary fighter, which was decades in development.

If the OBSS can be delivered as promised, it will offer a complement to the existing Air Force fighter wings. This drone is not a rival to the F-35, but instead billed as a force multiplier, allowing the robotic escort to carry additional weapons and sensors and, importantly, to take on some of the risk from the fight itself. One way to think of the OBSS is as a tool connected with a fighter, which receives orders from the pilot and can share what its sensors see.

[Related: This cutting-edge drone is headed out to pasture at an Air Force museum]

OBSS will take off and land on runways like a conventional jet. Once in the sky, the promise is that it will “provide significant performance for sensor extension missions for manned jet aircraft,” according to Kratos. It also “will accommodate significant offensive weapons volume to also act as a weapons bay extension for manned aircraft.”

The term for this kind of collaboration, as used by the Air Force, is “manned-unmanned teaming,” and it lets the autonomy of robot systems serve as an extension of human-directed power. Another Air Force Research Lab program working towards this goal is Skyborg, which has previously flown in Kratos-built drones. Skyborg is envisioned as a modular AI that can plug into a variety of drones, turning those planes into more-autonomous uncrewed wingmates for fighters.

Shifting the scouting functions to a cheaper drone protects the pilot’s life in the more-expensive plane, and means only some ability is lost if the drone gets shot down. In the past the Air Force has used the word “attritable” for drone programs like this, emphasizing that a lower cost means commanders can make plans with the expectation that some drones will be lost in the mission. For the OBSS announcement, both the Air Force Research Laboratory and Kratos used “low-cost” and “affordable,” which are subtler ways of highlighting the benefit of a cheaper vehicle relative to an expensive crewed plane.

[Related: The future of the Air Force is fighter pilots leading drone swarms into battle]

As Kratos president Steve Fendley told The War Zone: “Attritable means it’s going to have some limited life or limited number of missions, whether that’s one or 10 or a hundred, I don’t know. I would say that the programs we’ve been on and the requirements we’ve seen, there typically is a desire, at least, that says we would like this to be good for x number of hours or x number of missions.”

One way to take advantage of that reusability is outfitting the drones for the riskier parts of crewed missions. For an attack on an anti-air missile emplacement, having a human pilot in an F-35A or a C-130, for example, and directing the drone from a distance, lets the OBSS fly an attack route with some danger, with the goal of clearing a path through deadly defenses. This is a task that is sometimes done by cruise missiles or loitering munitions, which are destroyed in the hit. If the cost of OBSS is comparable to that of a cruise missile, or even a few cruise missiles, using one in battle with the expectation that most of the time it will return to fight another day makes sense from a balance-sheet perspective.

All of this future promise hinges on whether or not the prototype version in development by Kratos can deliver as promised. Fortunately for observers, the time to delivery is short, with an expected flight next year. Should that prove successful, the contract awarded has the option of an extension to 2024, with nearly $32 million more for the company should they deliver.

With a total possible contract award just shy of $50 million, OBSS is offering to develop a wingmate for stealth fighters at just 64 percent the purchase price of a single F-35A.

Jay-Z and Friends Rise to the Occasion With ‘The Harder They Fall’ Soundtrack: Album Review

Inflation Is Approaching a Tipping Point at the Grocery Store