‘The Bachelorette’ Recap: Clayton Echard Gets His Bachelor Edit and Michelle Young Picks Her Final Four 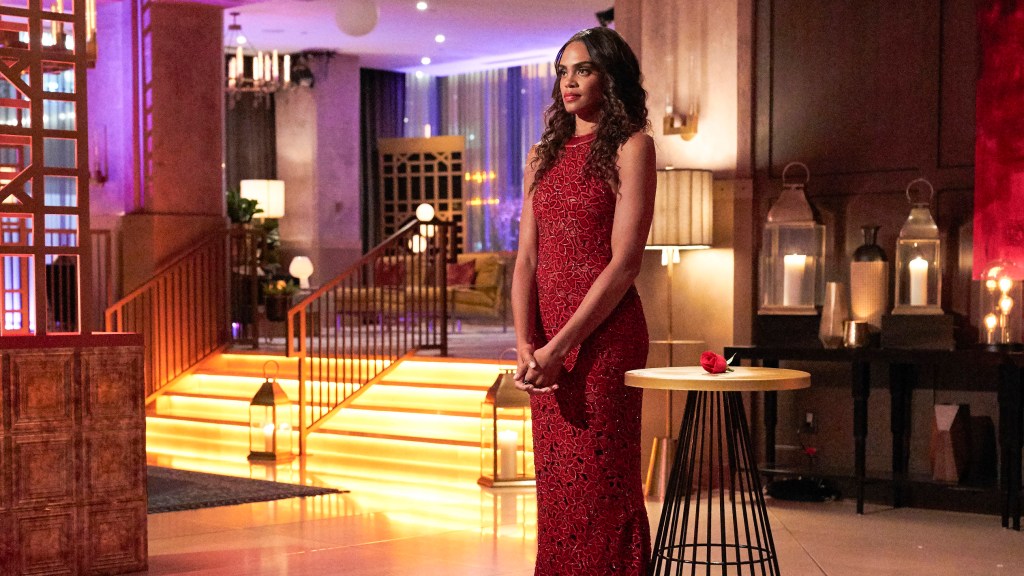 SPOILER ALERT: Do not read if you have not watched the Nov. 23 episode of “The Bachelorette.”

Titular Bachelorette Michelle Young cut her line of suitors in half on the Nov. 23 episode of the ABC reality dating show. Leading up to hometowns, Michelle hosted dates in her own city and was joined by a handful of her fifth-grade students. The four kids were put in charge of the week, responsible for planning the dates and selecting her men, which was a pool of eight narrowed down to the final four by the end of the two hours.

First, the contestants were given an opportunity to impress the children with an afternoon of activities. They took turns grilling the men (“Have you been grounded before? Have you farted in front of Ms. Young?”), before identifying their favorites.

Future Bachelor Clayton Echard stood out after building the students an epic pillow fort. He was rewarded with a date and was greeted by Michelle with a limo full of snacks appropriate for a group of 10-year-olds. Then, Michelle and Clayton ventured to the local museum and spent the evening running around playing games in an attempt to endear Clayton to viewers as the future franchise lead.

The evening date was less successful after Clayton tried to open up to Michelle. He shared his feelings, but they were unreciprocated by the Bachelorette, who cited stronger connections with other men. She assured him that her feelings were not a reflection on him, but rather a testament to her other relationships.

The next day, cameras reunited with Clayton after his rejection. He received and read through letters from the children he had impressed the day prior, who all shared why they liked him and their hopes for his future. They called out his endearing nature, and producers tried to further establish Clayton’s good-guy Bachelor edit. The letters brought him to tears, which was allegedly the first time he’d cried in years.

With one man down, the others attended the next day’s group date. They spent the day on a farm, where they all competed for Michelle’s attention and against each other in various challenges. Joe Coleman stuck out as especially nurturing, while Nayte Olukoya struggled to compete and tapped out from the last challenge after a back injury. Despite that, he was given the rose and secured a spot for next week’s hometown dates.

On the other hand, Martin Gelbspan was less successful during the cocktail party. There were already cracks between him and Michelle after a “miscommunication” turned hostile last week. But this week, Olu Inajide shared red flags that he saw in Martin, including hearing him call Michelle “immature.” She took the report to heart and immediately sent Martin home.

The final date of the week went to Brandon Jones. The two had a quick pitstop at her favorite ice cream stop before she brought him back to her childhood home. They shared a make-out session in the pool before they were interrupted by her parents arriving home.

Brandon — obviously embarrassed — still managed to charm her parents and even asked them for their permission to marry Michelle if the time came. They agreed, contingent on Michelle’s mutual investment in the relationship.

During dinner, he reiterated his feelings for her, gifting her a bracelet from his mom and telling her that he’s falling in love with her. She matched his feelings and gave him a rose, guaranteeing him a spot for hometown dates.

With Natye and Brandon locks for hometowns, Michelle felt confident in how she wanted to distribute her remaining roses and canceled the cocktail party. During the ceremony, she offered the final two spots to Joe and Rodney Mathews, sending Olu and Rick Leach home.

During a post-credit scene, one of Michelle’s students teased the future of Bachelor Nation after a clip of her painting Clayton’s nails: “I want Clayton to find a wife,” the student said. When prompted by a producer, she continued, “He’ll be the next Bachelor.”

“The Bachelorette” airs Tuesdays at 8 p.m. on ABC.