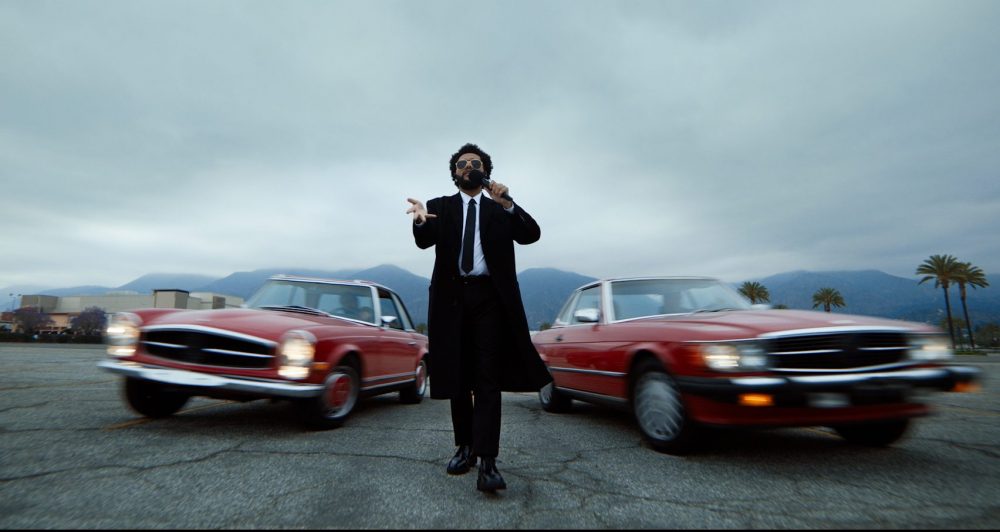 The Weeknd won a leading 10 awards at Sunday night’s Billboard Music Awards, including the climactic top artist trophy presented as the climax of the night, followed by the late Pop Smoke with five, and BTS and Bad Bunny with four apiece.

Accepting one of several awards on-camera earlier in the evening, the Weeknd promised a change of stylistic pace to come in his future album and performance cycles. “The after hours are done and the dawn is coming,” he vowed. At another point, he made a joke after beginning with a slight show-of-religiosity fake-out. “I’d like to thank God… that I don’t have to wear that red suit anymore,” he said.

One of the performance highlights of the three-hour telecast was a pre-recorded music video — shot in the enormous Arcadia mall parking lot, with foothills and the racetrack in the background (despite host Nick Jonas’ promise that it was being broadcast from “downtown L.A.”) — of his single “Save Your Tears.” Most of the performance took place in a single shot, with the Weeknd’s fast-moving convertible being followed by a full phalanx of other cars doing stunt choreography behind him, before it ended with an overhead, Busby Berkeley-style shot of the star and his vehicle surrounded by concentric circles of other cars and even semis.

The most impactful speeches belonged to Drake, who was receiving the artist of the decade award for his triumphs in the 2010s, and Pop Smoke’s mother, Audrey Jackson, who made a reference to the young age of the unidentified teen charged with her son’s murder.

Jackson offered a touching “thank you to the fans for honoring the life and the spirit of my son so much that it continues to manifest as if he were still here in flesh. He created music for the kid who has to sleep four in a room, the kid who has to figure out how to get to school each day so he can graduate and make his mom proud. He did this so that 14-year-olds would not have to kill to prove they are somebody. That is the irony in this. So thank you to Billboard Awards leadership for honoring my young warrior. Bashar Barakah Jackson, we call your name.”

Drake remains the most awarded BBMAs honoree of all time. He was joined on stage by by his son Adonis, mother Sandi Graham, father Dennis Graham and several friends as he earnestly accepted his artist of the decade honor.

Following an introductory video, Drake said, “That video was really full of a lot of confidence and bravado, but the truth is, I’m really bad at taking compliments… I’m really self-conscious about my music, and even if I do a good job, I always wonder how I could have done it better. I rarely celebrate anything. And just for anyone watching this that’s wondering how this happened, that’s really the answer: being so unsure how you’re getting it done that you just kind of keep going in the hopes of figuring out the formula.” He described himself as “feeling so lucky and blessed that the fear of losing it keeps you up at night.

“I didn’t really write a grandiose speech about how to make it work or what it took, because to be honest, I don’t quite understand it myself,” Drake added. “I just know that I’ve spent an incalculable amount of hours trying to analyze all the things I did wrong, but tonight for once I’m sure as hell we did something right.” He added a message “to all my peers: All of your decisions and the music you make really does keep me tossing and turning at night trying to figure out what I should do next.”

It was bring-your-child-to-work night, as Drake was not the only one lifting up a son or daughter. Pink not only included her daughter in the proceedings but had Willow, 9, take part in an aerial ballet set to a song they recently released as a duet, “Cover Me in Sunshine.” It was the beginning of a medley that Pink did of her greatest hits, plus another new song, “All I Know So Far” (title song of her new Amazon Prime documentary), prior to being handed the Icon Award by her childhood crush, Jon Bon Jovi.

The show took place in front of a fully vaccinated, fully masked live audience in the plaza outside L.A.’s Microsoft Theatre, with winners emerging from an enclosed “backstage” area to accept their awards with their backs to the crowd — most of them remembering to turn around and give the fans a wave. Some of the performances took place live on the plaza, including those by Twenty One Pilots, AJR, Glass Animals and DJ Khaled with H.E.R. and Migos. Other, more elaborately staged numbers were recorded inside the theater without an audience, including Pink’s extensive medley of old and new songs, a Doja Cat/SZA duet and Alicia Keys’ medley of songs from her 20-year-old debut album.

BTS filed its performance of “Butter” from Korea. Much as the group did with set designers’ mimicry of the Grammy Awards setting at that recent show, part of their set for “Butter” was made to look as if they were executing their choreography on a very spatial version of the Billboard Awards’ red carpet, although there was no pretense about the real setting, as BTS has not left Korea since the beginning of the pandemic.

The show also had performances filmed in other off-site locales — Duran Duran doing the new “Invisible” amid some familiar chestnuts from London; Minneapolis for Jimmy Jam, Terry Lewis, Ann Nesby and the Sound of Blackness, reviving the 30-year-old hit “Optimistic” — although none quite as exotic as the Weeknd’s vast, emptied out Westfield Arcadia setting.

A full list of winners, most of them presented off-camera, follows. Country star Morgan Wallen’s three wins are followed with an asterisk, as the BBMAs and Dick Clark Productions have used it to point toward a formal statement about how the embattled singer was not invited to participate in the show, due to the scandal over his N-word use earlier this year. Producers said he could not be disqualified from awards that are completely data-driven, as most of the BBMAs are, aside from a handful of fan-voted honors.