This four-legged snake fossil was probably a skinny lizard 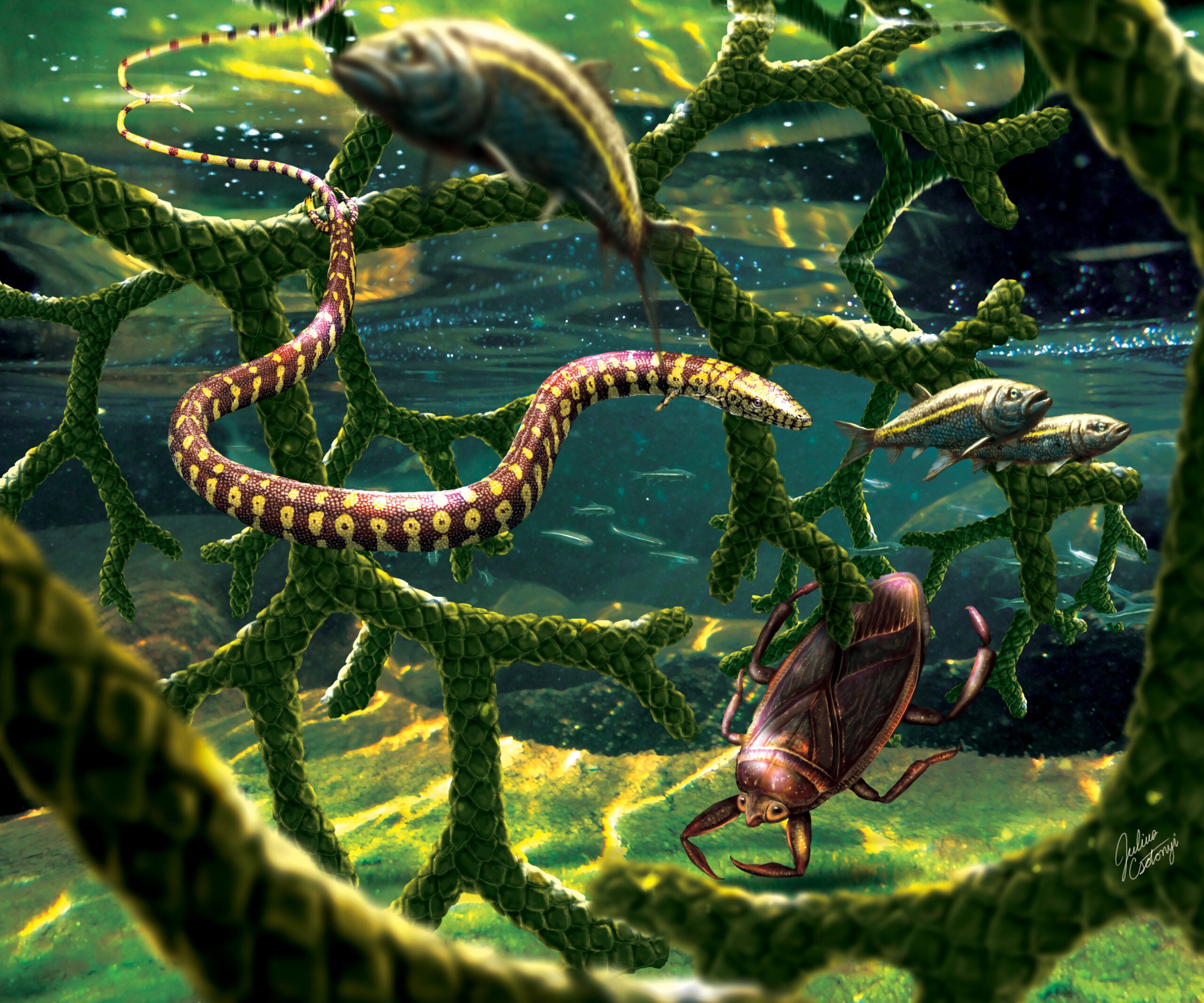 A mysterious fossil previously thought to be a four-legged snake is actually an ancient lizard, a new analysis suggests.

Researchers first identified the roughly 120 million-year-old specimen from Brazil as a snake in 2015, based on its skull and other skeletal features. But now, after examining the rock containing the tiny reptile, another international team of scientists concluded that it was misclassified.

The ongoing debate surrounding the species, named Tetrapodophis amplectus, has implications for our understanding of the evolutionary history of snakes. It also touches on important ethical issues related to studying a fossil that was likely illegally exported from Brazil, the researchers wrote on November 18 in the Journal of Systematic Palaeontology.

“We wanted to challenge the science as it was originally published and also to restart the discussion around the species and its repatriation back to Brazil,” says Michael Caldwell, a vertebrate paleontologist at the University of Alberta and coauthor of the new paper.

Scientists have long searched for fossils that would help illuminate how early snakes transitioned to a limbless body plan (a feature also shared by some modern lizards and amphibians). And indeed, researchers have identified several early snakes that still possessed hind limbs. So the idea of a missing link between snakes and their lizard ancestors is hardly surprising.

“But in the case of Tetrapodophis, the anatomy just does not support the animal being interpreted as an ancient four-legged snake,” Caldwell says. “Therefore what we see doesn’t tell us anything about the origins of snakes or the evolutionary progression of body elongation, limb loss, and skull specialization in snakes.”

The specimen is thought to have come from the fossil-rich Crato Formation in northeastern Brazil and dates to the early Cretaceous Period. The exact circumstances are murky, but it’s likely that Tetrapodophis was collected without permits and left Brazil through the illegal fossil trade, Caldwell says. The fossil now resides in a private collection, raising additional ethical concerns about studying specimens that aren’t widely accessible (both teams of researchers were able to examine Tetrapodophis while it was on loan to a museum in Germany).

[Related: These snakes wiggle up smooth poles by turning their bodies into ‘lassoes’]

“It’s really important for people to acknowledge the origin of specimens, because they come from a place that is not lost in time,” says Tiago Rodrigues Simões, a paleontologist at Harvard University and coauthor of the new study, who is from Brazil. “It’s actually a region where people live and it’s part of the local heritage.”

Returning Tetrapodophis to a Brazilian collection is crucial “not just to fulfill what the law requires, but also as part of standard ethical practices,” he says.

When scientists first described Tetrapodophis in 2015 in the journal Science, they noted features that may have been adaptations for burrowing, constricting, and opening its mouth wide enough to swallow large prey, similar to those seen in modern snakes.

Caldwell, Simões, and their colleagues interpreted the specimen differently.

A major  difficulty the researchers have run into is that the Tetrapodophis skull is very poorly preserved. “When the slab was split open to reveal…the specimen inside, most of the material from the right side of the skull was lost, and the left side is just a shattered mass of eggshell-thin bone,” Caldwell says. Examining the impressions in the natural mold created by the rock surrounding the fossil, however, allowed the team to investigate the skull in more detail.

Based on the shape and positions of the jaws and eyes, they determined, the reptile bore more resemblance to lizards than snakes. And while Tetrapodophis would have been flexible, the researchers didn’t find evidence that its vertebrae were particularly suited for constricting. The team also concluded that Tetrapodophis‘s skinny, flattened body was more ideal for aquatic habitats than burrowing, not unlike those of eels and modern sea snakes. The reptile may have used its stubby limbs for steering while it swam, they wrote. Also suggestive is the fact that the specimen was found in sediments that were deposited in a lake, Caldwell says.

He and his colleagues also analyzed the reptilian family tree to predict where Tetrapodophis might have fit in. They found that it likely belonged to a group of extinct marine lizards called dolichosaurs, which are closely related to snakes.

Tetrapodophis would have been an “extremely tiny little animal,” Caldwell says, although until more specimens are discovered it remains uncertain whether it was a fully-grown adult. The fossil is only 19.5 centimeters (7.7 inches) long, and its “incredibly skinny” form is suggestive of “chubby spaghetti,” he adds.

Not everyone is convinced by the new report.

“There’s certainly room for debate about some aspects of the skeleton—in some places the bones are broken, or covered up by the rock, so the shape of some bones isn’t clear,” Nicholas Longrich, a paleontologist at the University of Bath in England and coauthor of the 2015 paper, told Popular Science in an email. “But overall I still think the anatomy is far more consistent with the animal being related to snakes.”

Deciphering the family relationships of this fossil are critically important, he emphasizes. “As the oldest and most primitive snake, it has a lot to tell us about early snakes—what they looked like, how they lived, where they lived,” Longrich said. “I don’t think this paper will end the debate about snake origins.”

Even if Tetrapodophis isn’t a four-legged serpent, though, the fossil is intriguing for other reasons, including its supremely elongated shape, paddle-like limbs, and an “inordinate” number of vertebrae compared with most snakes and lizards, Caldwell says.

“What Tetrapodophis is informative of is an unsuspected level of diversity in the evolution of elongation and limblessness in lizards,” he says. “It’s unique on its own without being a snake.”

This four-legged snake fossil was probably a skinny lizard

Turning Back the Clock

‘Revolution of Our Times,’ ‘The Falls’ Triumph at Golden Horse Film Awards

‘Tick, Tick…Boom!’ Is a Love Letter to a Beloved LGBTQ+ Ally

Save over $90 on this exercise tool designed to help you achieve a chiseled...